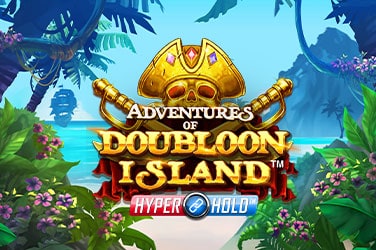 This isn’t the first slots adventure on which Microgaming has partnered with Triple Edge Studios, but it is the first pirate themed adventure on which the pair have collaborated. Such is the high regard in which Microgaming holds Triple Edge that the studio was chosen above all others to deliver the flagship Lara Croft: Temples And Tombs slot release in 2019. That game operated over 243 Ways to win, but the Adventures of Doubloon Island slot opts for a more classic approach as it plays over 20 paylines.

There is nothing vintage about the graphics or gameplay though, as any adventurer looking for serious booty will cream over this title’s two bonus features and a Win boost feature that can see you top up your treasure haul even more. 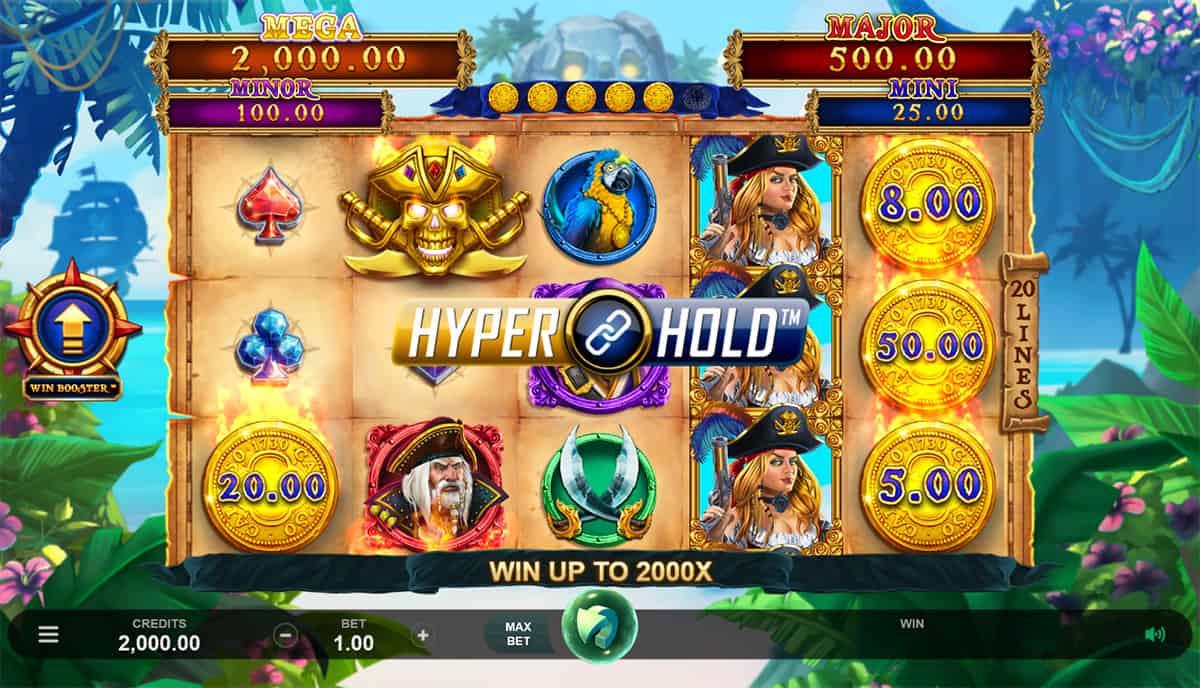 The Adventures of Doubloon Island slot is graphically rich, set against a deserted island backdrop that would have any location scout frothing at the bit. The reelcase has frayed edges like those of an ancient map, while the HyperHold symbols flame around the edges. When you launch the Free Spins feature the scene takes a turn for the moody, with the day turning to night and making the treasure glow even more.

It is unclear whether the fearsome wench with the pistol is the captain of this pirate ship, but she is our most sought after symbol as the game’s Wild. Wilds are often the key to scoring big base game wins when you play online slot games, and this one appears stacked on all reels and animates neatly to turn those reels Wild to complete winning combinations as she goes.

Regular low paying game symbols are jewelled Card Suits, while Cutlasses, Parrot, First Mate and Old Sea Dog do the business as the medium to high payers. Landing five Wild symbols awards x50 your stake, while the Old Sea Dog drops off to a mere x20. All game symbols can appear stacked, making for more chances of big wins. 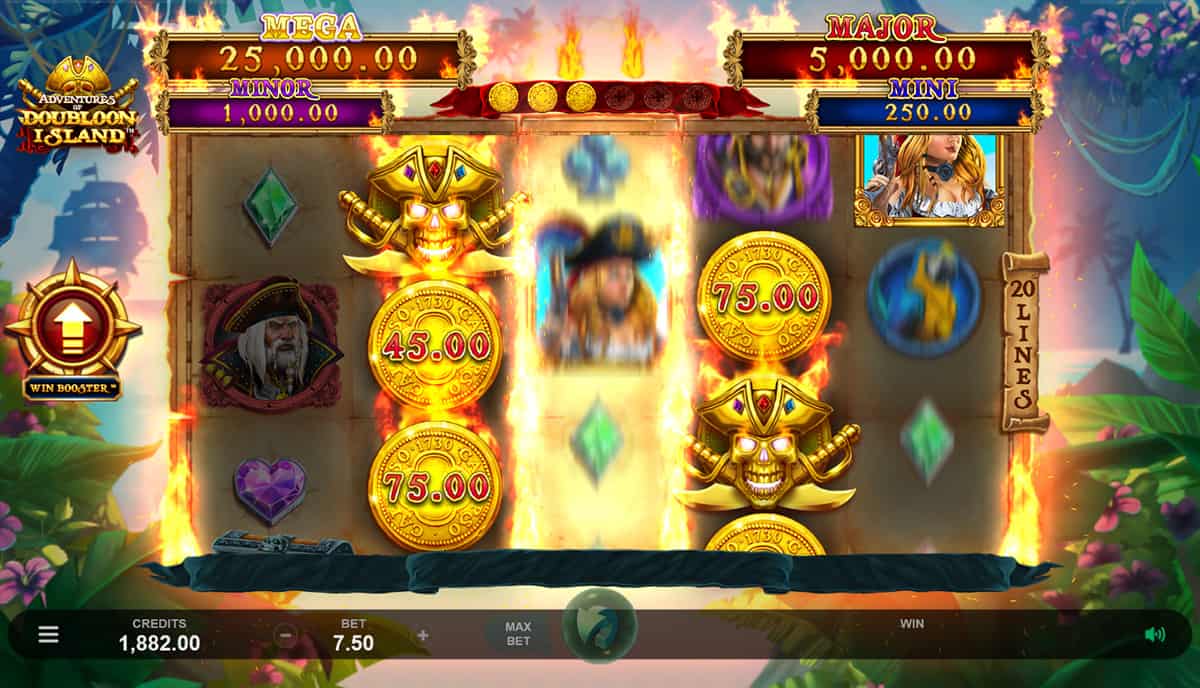 As the reels spin you will notice four jackpot amounts above the reels and Gold Doubloon symbols spinning past. Each one of these features a cash amount, and are sent up into the HyperHold collector above the reels. You need to collect six Doubloons in order to trigger the HyperHold feature. Initially you win 3 spins, which reset when you land another Gold Doubloon on the reels. The feature ends either when you have filled up the reels or have run out of spins, hopefully the former.

If you have played the Arena of Gold slot - a collaboration between Microgaming and Neon Valley Studios - you will be instantly at home. Any of the Doubloons here can feature one of the jackpots indicated above the reels, the Mini, Minor, Major and Mega Jackpot. This latter is the game’s top payout award, and the biggest possible prize to come away from Doubloon Island.

Away from the HyperHold feature, Adventures of Doubloon Island also boasts a Free Spins game, triggered when you land three or more Scatters anywhere on the reels. 3, 4 or 5 Scatters launches 10, 15 or 20 free spins, during which all low paying symbols have been removed.

The WIn Booster feature is optional, toggled on and off by clicking the feature to the left of the reels. It boosts the jackpot wins by 50%, giving the Mega Jackpot a leg up to x3,333 your bet rather than x2,000. Tasty. 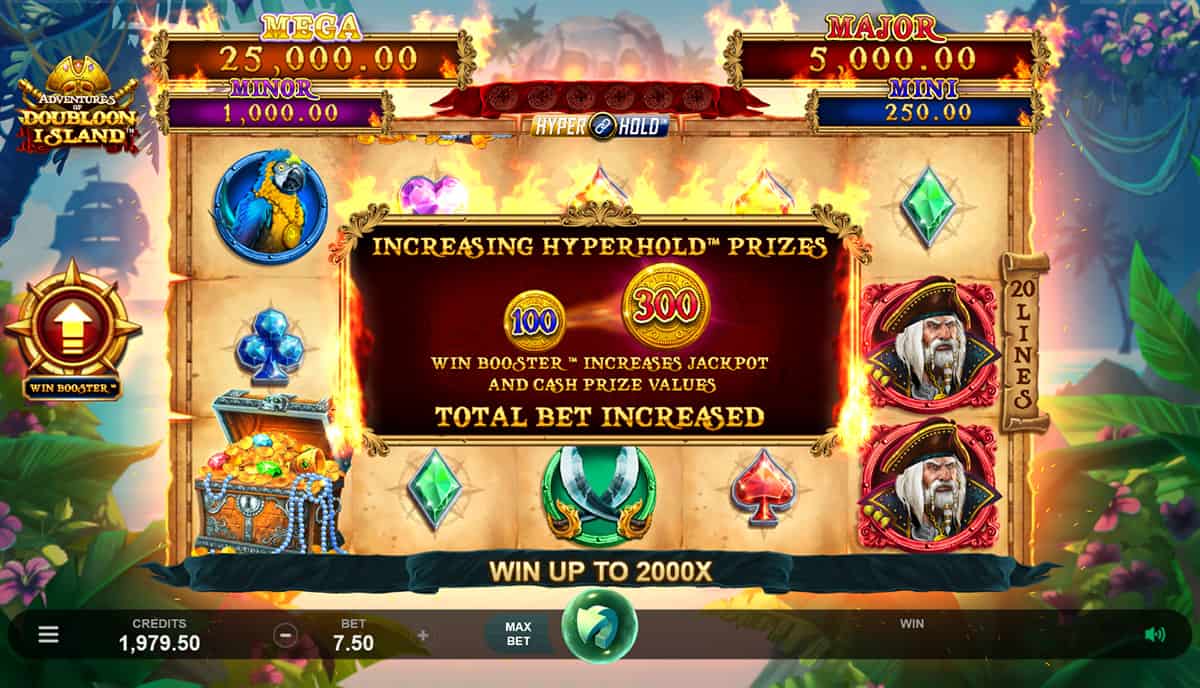 The Adventures of Doubloon Island slot might not be the first pirate themed adventure in slotland, but it is sure to last long in the memory. The soundtrack and graphics are excellent, while the two bonus features, Stacked Wilds and Win Booster feature offer enough for any intrepid adventurer to stick around. Should you scoop the biggest jackpot possible from the HyperHold feature, there is no doubt that this will be a record haul for any band of pirates.