“The name’s Blonde. Jane Blonde.” We all groaned when we heard people saying that years ago with the release of Microgaming’s Jane Blonde slot. Then we took it for a spin and realised how great it was and we, too, became guilty of saying it.

That was a while ago now, and around the kind of time Microgaming was releasing classics like its King Cashalot progressive jackpot. Now, a full 14 years after the original slot release, the time came for us to say it all over again with the much anticipated slots sequel – Agent Jane Blonde Returns. 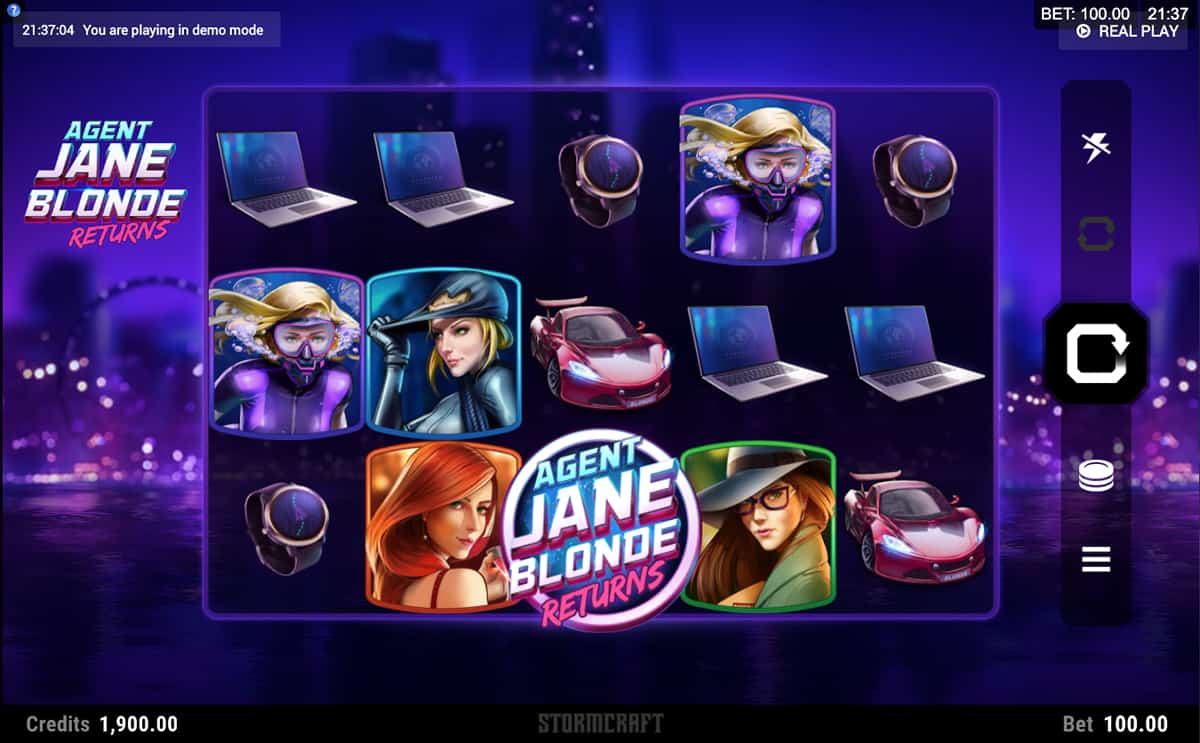 The years have been kind to Jane. It may have been a long time since she first appeared on the Agent Jane Blonde slot, but she’s back looking better on the sequel.

We’re not saying she’s had Botox or any work done…she’s just had a revamp thanks to Microgaming’s partnership with Stormcraft Studios, who helped to create the slot. You may remember Stormcraft from such projects as Microgaming’s Fortunium slot release, a steampunk adventure epic set in a fantasy land. Jane Blonde, meanwhile, is very much routed in the reel world and, glamorous as ever, Jane appears as the high paying symbols in various guises, just like she did in the original.

This time round we have a smartly dressed Jane in a dress, undercover with hat and glasses, stealth gear and underwater outfit. The low paying symbols are made up of Watches, Laptops, Cars, Passports, Handbags and Cash – items all associated with the spy lifestyle.

We are also treated to nifty glowing highlights (on the reels, not in Jane’s hair) when we land Scatters and winning combos. 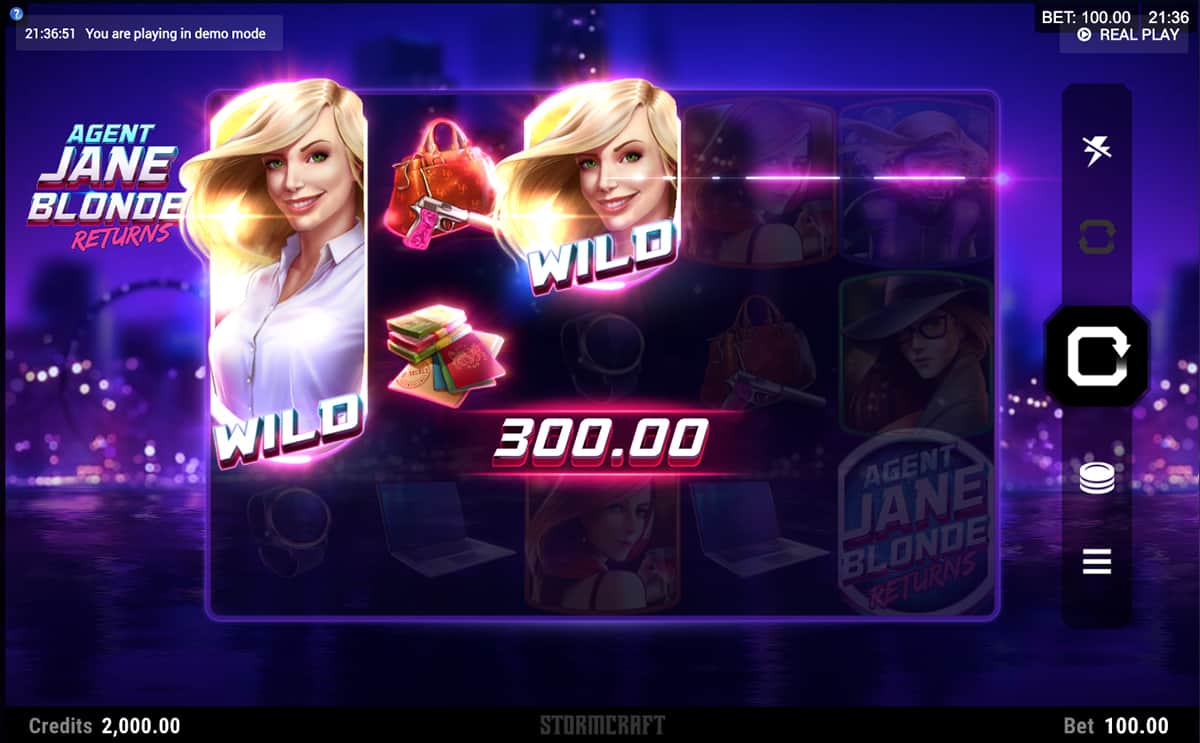 It’s all action stations on Agent Jane Blonde Returns Slot as yet again we enter a world of espionage and subterfuge. This time round we notice all the enhancements that Microgaming has made, not just the graphics.

The smooth animations and soundtrack help to create a Bond-esque atmosphere. One thing that is noticeable is the lack of a proper bonus round. Instead we get Wilds in the form of the Agent Jane Blonde symbol and the logo symbol as the Scatter. When this appears twice on a spin, we trigger Respins.

The reels then respin until no more Scatters land, at which point the Scatters then change into Wilds. This is where the big wins come in, with the chance to win up to 300 times our stake on every single Respin. 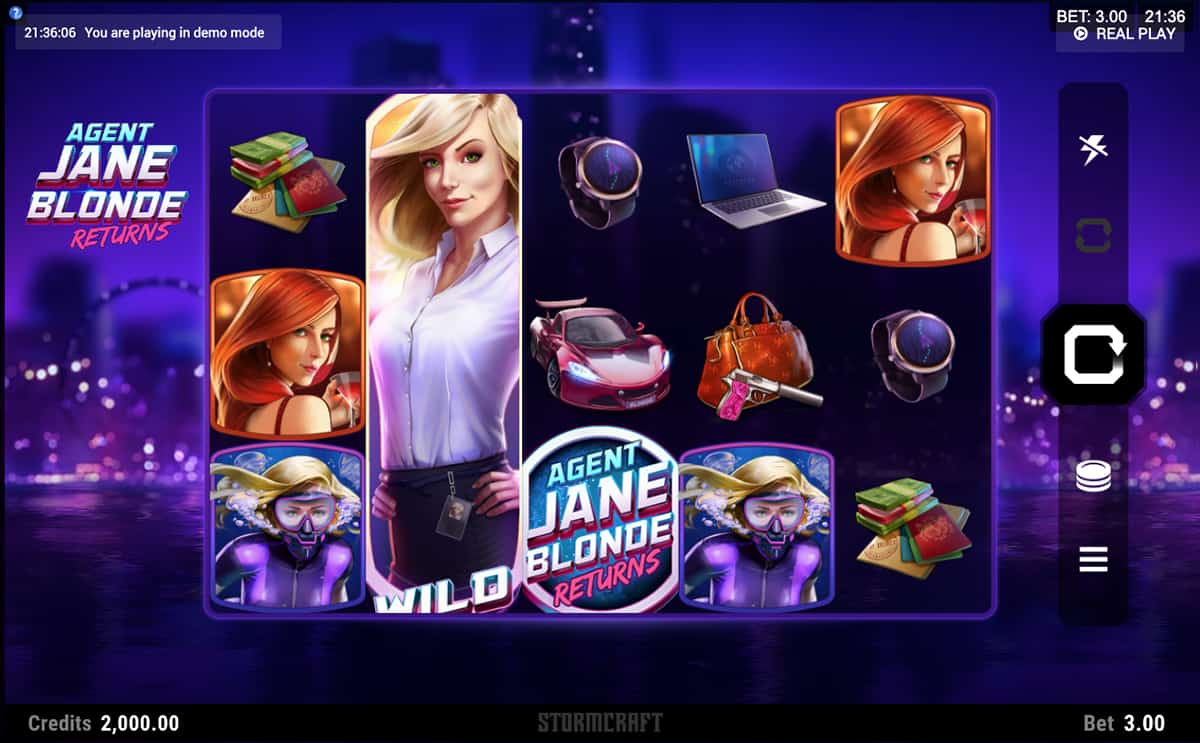 Microgaming sure took its time in giving us the Agent Jane Blonde sequel we’ve been waiting for. Though in that time, we’re sure it could have tried a bit harder, Agent Jane Blonde Returns is a fun slot to play.

It’s great seeing the heroine back in full force, rebooted for a new audience. More bonuses would have been appreciated but what made the original slot so good was its simplicity. And this carries on to Jane’s second outing, so any fans of the original will love this.

Even if you’re not, but you’re enticed by the prospect of entering a spy world with generous rewards and a ass-kicking yet stylish heroine, then we’re sure you’ll be spouting “the name’s Blonde, Jane Blonde” too.