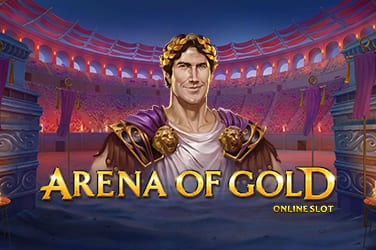 Microgaming continues its partnership with indie studios with its Arena of Gold online slot. A Roman Gladiator themed slot game that boasts three Jackpots. It is another adventure into ancient Rome for Microgaming. Who released its Augustus slot at the tail end of 2020 in partnership with long-time collaborator Neon Valley Studios.

The Arena of Gold slot doesn’t feature stacked symbols like that game. Though it does feature two bonus rounds, a Free Spins game that feature Big Symbols. (well worth the capital letters) With the Golden Re-Spins feature that award the game’s top jackpot of x1,000 your stake. 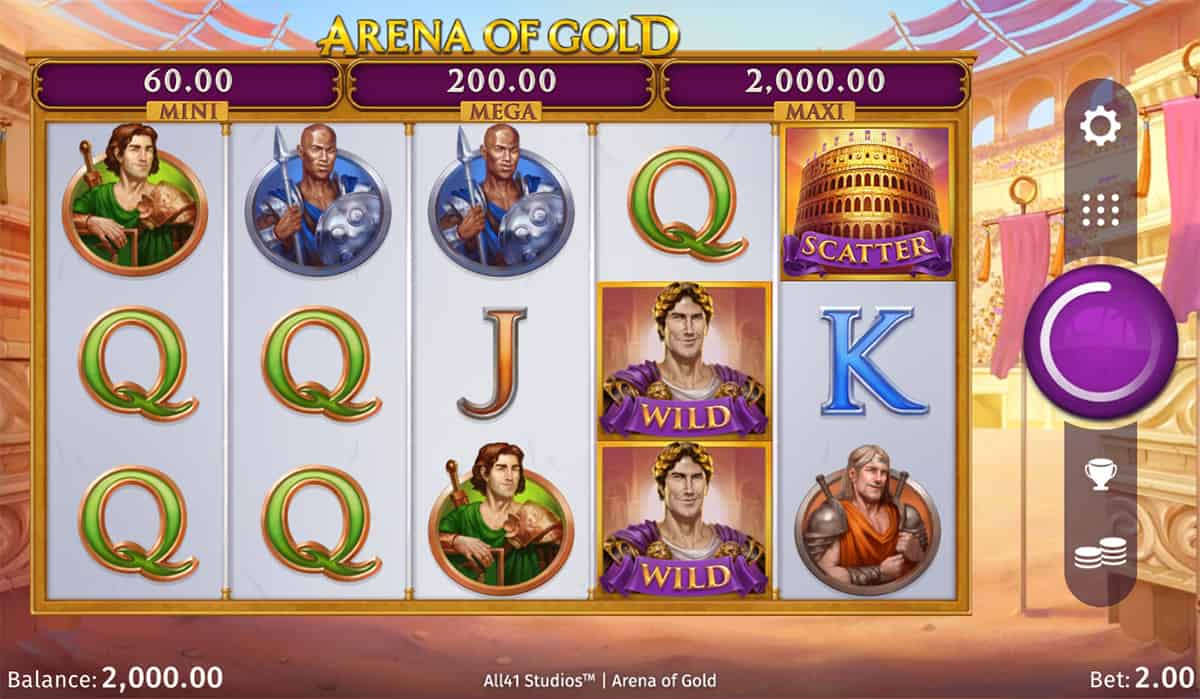 Perhaps predictably, the top-paying symbols in Arena of Gold are the Gladiators set to fight. They pay between x7.5-x20 your stake for landing five across a payline, while rather more standard Royal Cards make up the lower paying symbols. If you have played other Roman themed slots you will recognise the style of the Gladiators, with each one styled in different colours to set them apart.

Even more interesting, though, are the Coin Symbols spinning on each reel. These are effectively Scatters that trigger the Golden Re-Spins feature and provide the key to the game’s top jackpots. The Colosseum Scatters trigger the Free Spins round, while Caesar completes winning combos as the game’s Wild. All game symbols can appear stacked, including Caesar. 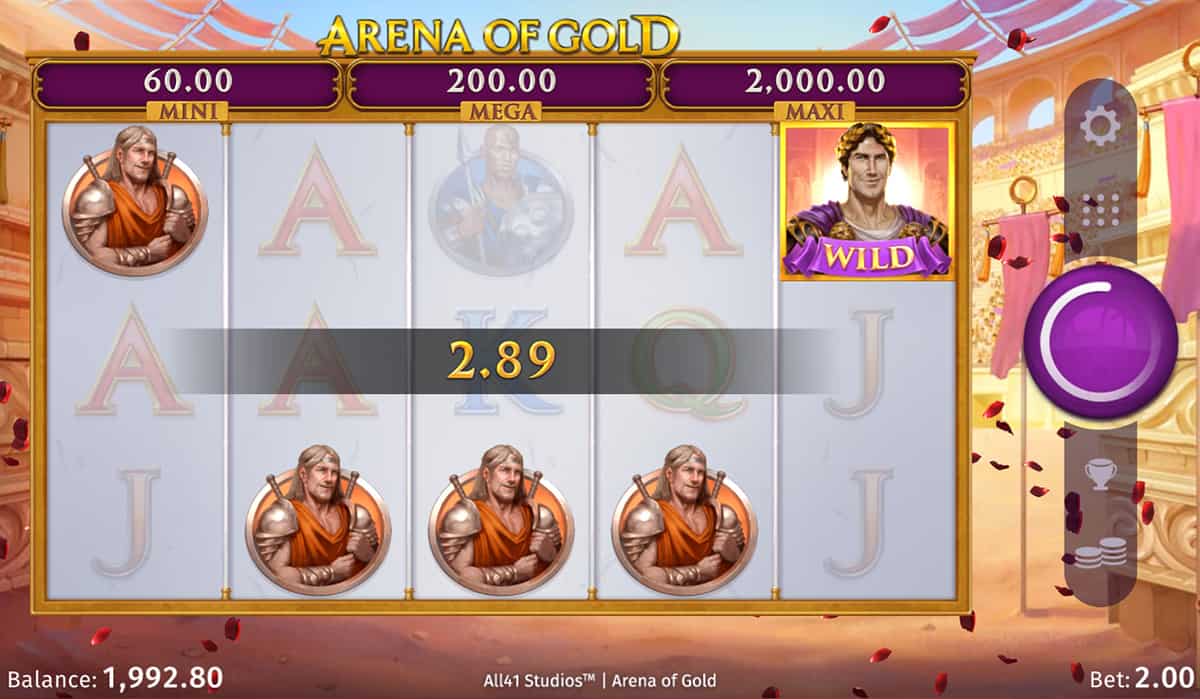 The Colosseum Scatters only land on reels 1, 3 and 5 and trigger Arena of Gold’s Free Spins feature. The middle three reels are linked and feature Big Symbols (well worth the capitals). If you can complete Big Symbol wins with either stacked Caesar Wilds or the matching symbols on reels 1 and 5 you are looking at multiple payline wins. The feature starts with 5 free spins, with each three extra Scatters awarding an additional 3 free spins.

While the payouts during the Free Spins feature can be generous, it is the three jackpots on offer during the Golden Re-Spins™ feature that really catch the eye. Landing six Coin Scatters anywhere on the reels triggers the feature, with those Coin Scatters held. Now you have three free spins, during which any further Coin Scatters land resets the free spin counter to 3. 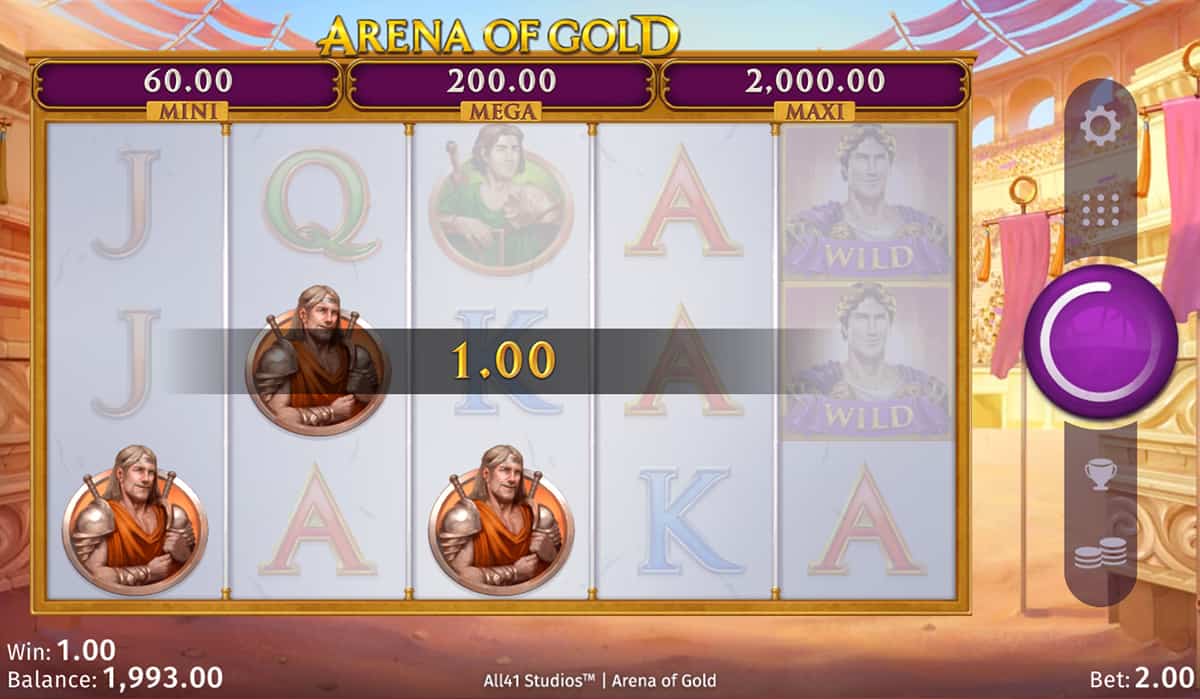 Let’s be honest, there are plenty of online slots set in Ancient Rome out there. But anyone who has ever played SG Digital’s Spartacus: Gladiator of Rome will know that some can be more complicated than others. Arena of Gold keep’s things relatively simple, but with two separate bonus features, stacked Caesar Wilds and the opportunity to win x1,000 your stake this title has enough to get the thumbs up from the Sunny Casino Emperor.