What happens when you combine all the fantasy elements of a Disney film with those of the magical world of Harry Potter? Hey presto! You get pure slots magic. Known for its visually sumptuous slots. NetEnt gives us Golden Grimoire Slot. Filled with Mystery Symbols and Wild Substitutions.

Forget everything you thought you knew about wizarding. There’s no bibbidi-bobbidi-boo or Wingardium Leviosa here. Just something that leaves us completely spellbound. 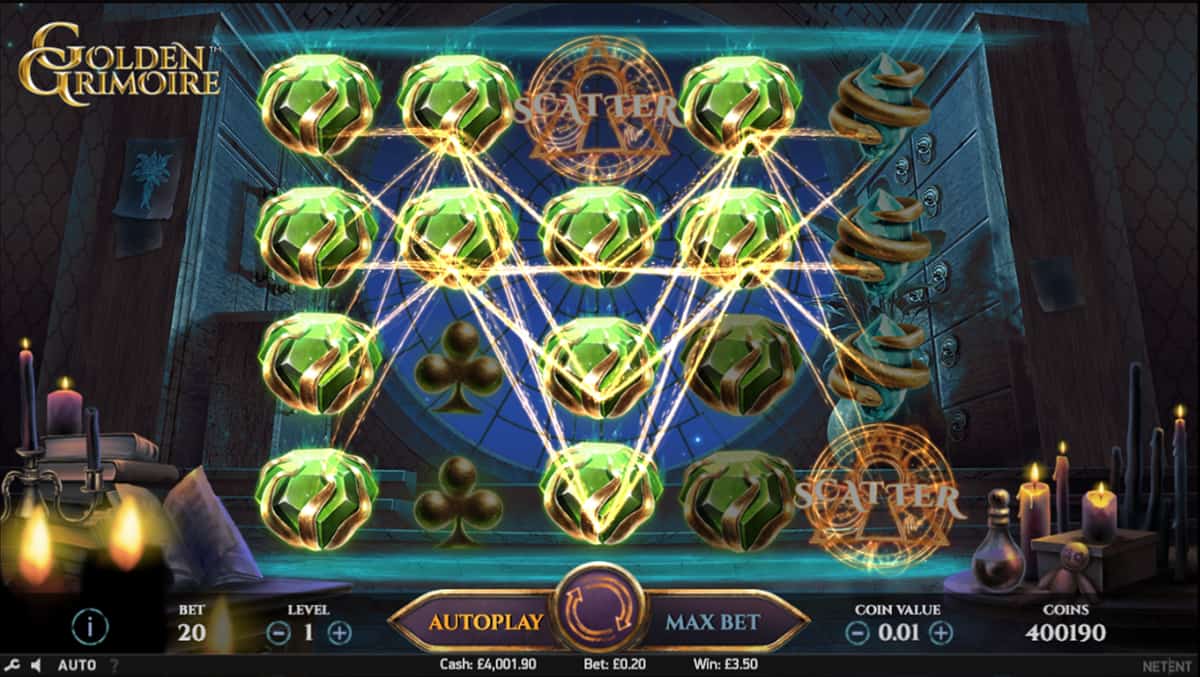 Grimoire isn’t really a word that’s bandied around in everyday use. If we’re going to use it, it’s going to be in conjunction with magic. Which NetEnt obviously knows as well because the title of the slot stands out – Golden Grimoire.

A grimoire is essentially a giant magic encyclopaedia, and that’s the setting of the slot. Inside, we see a selection of ornate symbols, representing the magic spells that wizards and witches are used to reading. The main symbols include different coloured gemstones with animals adorning them, for example a Blue Sapphire with a snake twisted round.

We also get Hearts, Clubs, Spades and Diamonds as the lower paying symbols. While our eyes are looking at the floating symbols, in the background we’ve got a starry sky through a large round window. If we’re going to be tackling the grimoire, we want a lush background! 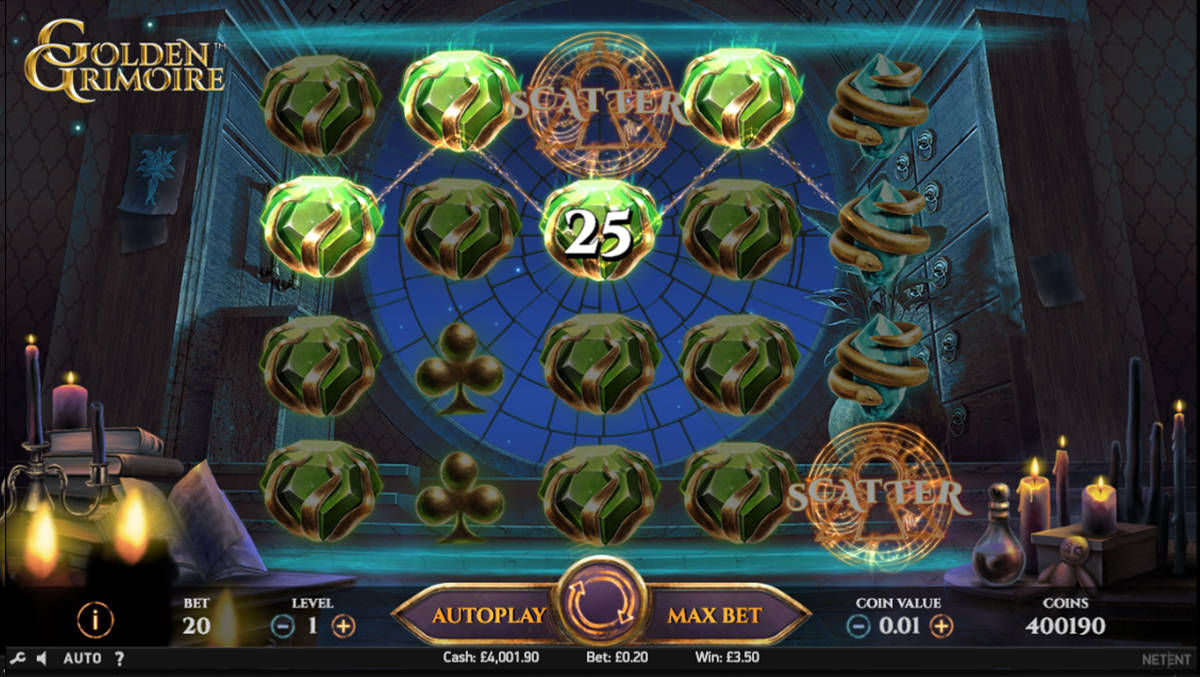 The paylines are typical to a NetEnt slot and the paytable can be easily found by searching the bottom navigation menu. In fact, all the useful buttons such as Autoplay, Spin and Max Bet are all conveniently placed.

As we spin the reels, the contrasting colours of creepy crawly jewels meld into whirly rainbows before coming skidding to a halt. Any win is accentuated further by glimmering magical lines that let us know just what we’ve won.

The Ruby with the spider is one to watch for as it pays out 100 coins for five on a payline, and with all symbols having potential to appear stacked that’s opportunities aplenty. But it’s the Mystery Symbol which adds a real magical element of surprise and whimsy. Coming in the shape of a Spellbook, it yields random symbols, including the Wild.

This symbol then appears on reels three, four and five, to help create winning combos. If the transformed symbol matches the leftmost symbol in a row, all the symbols then transform too for an instant - and sizeable - win. It sounds complicated but believe us, it’s not. It’s just magic.

The Free Spins feature is also a welcome addition to our spell chanting experience. Eight Free Spins for three Scatter symbols on the first, third and fifth reels, but this time round there’s a Sticky Mystery Symbol to take advantage of. We told you it was magic! 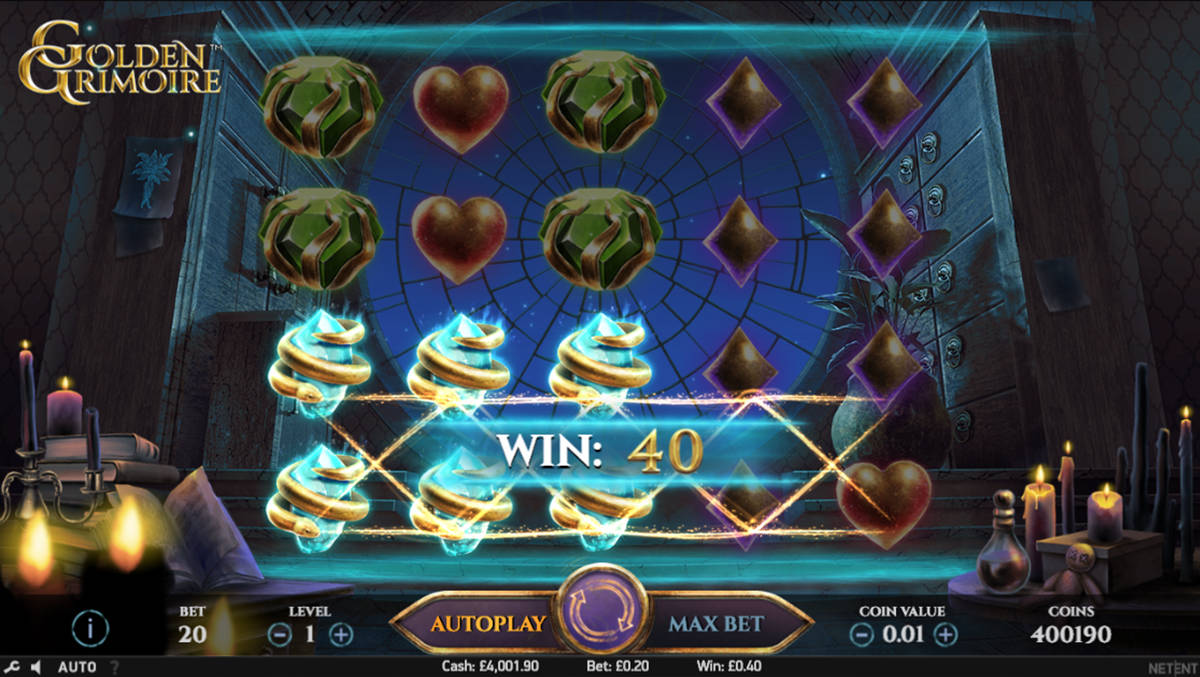 Yet again NetEnt delivers visual delights effortlessly. Golden Grimoire is a perfect example of this.

Everything about it has the NetEnt magic touch (pun intended) – smooth spinning of the reels, vivid colours and uniquely designed symbols.

And with the name Golden Grimoire it sounds more authentic to the witching world.