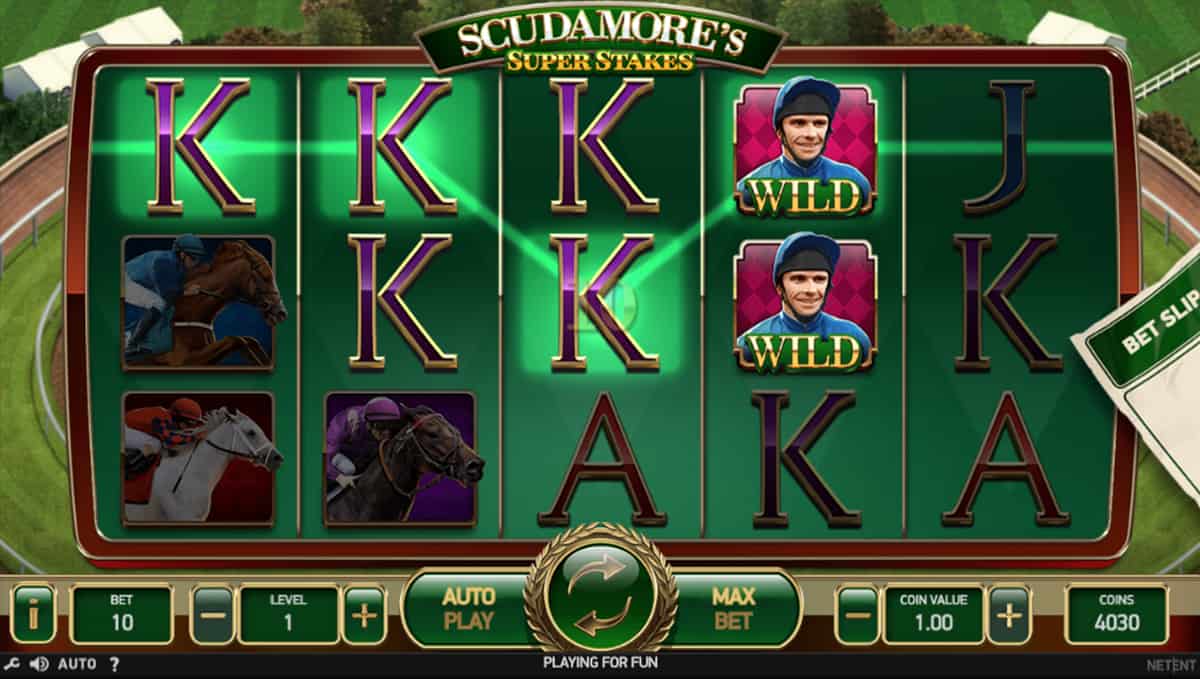 Taking a trip to the races will definitely help make this slot feel familiar as it’s all to do with horse racing. The clue’s in the name. NetEnt fans’ favourite slots like Warlords: Crystals of Power and Gonzo’s Quest feature epic intros, and to set us up for this horsey slots bonanza we are treated to an intro that sees horses leap a fence, closely followed by the game’s features.

The brown and green colours of racing tracks make its ways to the slot as the reelcase sits firmly in the midst of a racing course. Brighter colours do make an appearance in the form of the jockeys. Four differently coloured racers – Green, Purple, Red and Blue, appear on horses and act as the high paying symbols. Maybe NetEnt was on a bit of a budget when re-using the horse and jockeys but then we’ve been to a racetrack before and they all do look the same!

Though there’s always one that stands out and in this case it’s the Red Jockey on the white horse who can give us 12.5 times our stake for five across a payline. The traditional card values, Jack to Ace also make an appearance as the lower value symbols. 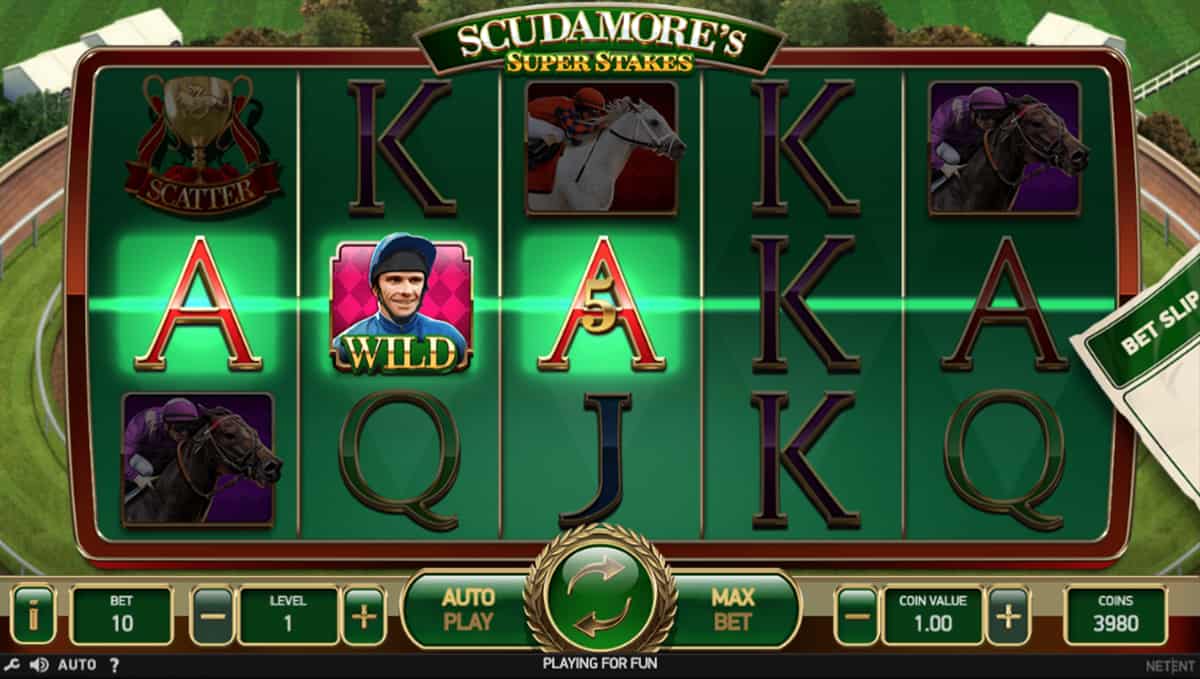 At first, we thought we’d have to love racing to appreciate this slot. But that’s just not the case at all. And that’s to do with the three bonus features available. The Random Wild does exactly what it says and comes in to play on any spin. Between two and five Horseshoe symbols randomly appear on the reels. Wherever they land, they turn Wild and complete winning combinations as they do so. The feature is reminiscent of the various added WIlds features NetEnt employed so superbly on its Planet of the Apes slot (among others!), in that case with added Wilds flying across two distinct - though also linked - sets of five reels.

Back on the racetrack on Scudamore's Super Stakes, the Bet Slip feature gives us an insight into horse betting and a greater feel for the sport. Again, we don’t have to be a gee-gees fan to enjoy this.

A Bee Gees fan, neither. During the base game we have one Bet Slip and we get to choose one symbol and then a number of spins, for example seven occurences of the Wild symbol in ten spins. Then the Bet Slip Track calculates how many times a symbol appears during our selected spins and rewards us with a Multiplier. It’s a nice addition to our slots playing experience, helping to create an authentic racetrack vibe.

But nothing’s more authentic than the Peter’s Classic Cup feature, which is triggered when the Trophy Scatter appears on the first, third and fifth reels. Suddenly our reels expand to five by four and our paylines increase to 32.

The reels move to the bottom of the screen as a racetrack appears above. We pick a horse, such as the Red jockey which can pay out 5,000 times our stake and sit back to watch the race and shout at the screen. Ahh, just like the races. 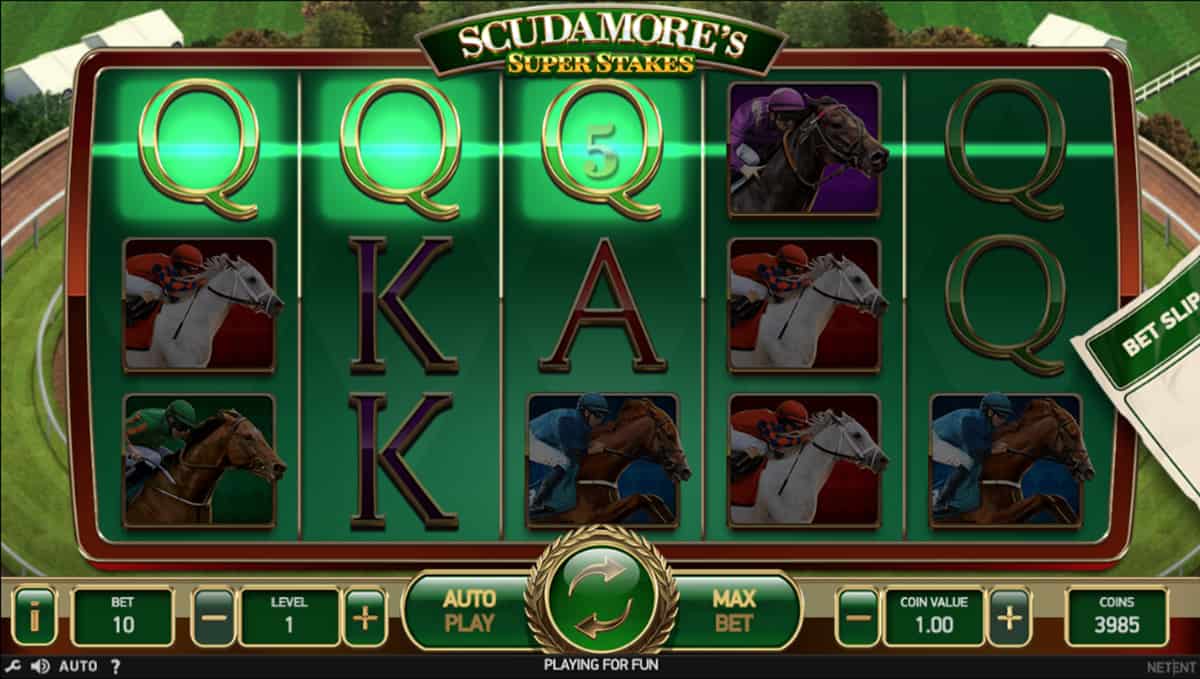 NetEnt’s Scudamore’s Super Stakes slot is an exhilarating experience. The combination of horse racing, betting and slots spinning works extremely well together. And it doesn’t even matter if we don’t know who Peter Scudamore is.

Because now he’s the guy whose face is all over this slots masterpiece. So it is that NetEnt scoops the coveted Trainer’s Trophy. Again.