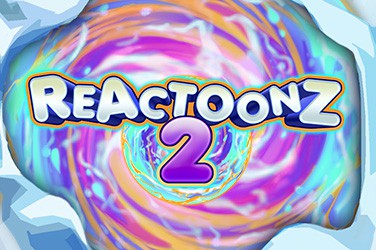 Slot developers only release slot sequels for two reasons. Either the first was a success and the sequel intends to build on that popularity, or the first release wasn’t as developed as well as it could have been so the studio has gone back to the drawing board and started again.

The first Reactoonz slot falls into the former camp, with Play ‘N Go clearly feeling that it had enough legs as a concept to warrant a sequel. And why not? It’s a slot-come instant win game that sees us try to match clusters of Toonz, little aliens that are quite happy being part of our game as they create Electric Wilds and fill up energy meters as we go.

With a name like Reactoonz you would expect the graphics to be fun and cartoonish, and that’s exactly what they are. Little aliens fill up the game board, blinking their various eyes and popping with satisfaction when they complete winning combos by landing in groups of five or more. More Reactoonz fall into the vacated spaces, completing further winning combos as they do.

When the Electric Wilds complete winning combos they make the Reactoonz pop and send their harvested energy into the Fluctometer. We ‘ve seen similar mechanisms in games like Skillz Gaming’s Fruit Blast - the more you fill the meter the more bonuses you activate. The same is true in Reactoonz 2, as the Fluctometer sends more Electric Wilds down onto the reels to complete winning combinations.

The Reactoonz are the game’s symbols, with a different Reactoon appearing in the centre of the Fluctometer at the start of each spin. When the Reactoon chosen in the Fluctometer completes winning combos they charge the Fluctometer. One full revolution sends between 1-3 Electric Wilds down onto the reels. Ultimately, though, it is the Quantumeter that is the key to the biggest winnings in this game.

Reactoonz 2 falls into the fun and fast gameplay camp. Bonus junkies will bemoan the lack of dedicated bonus features, but the way the Fluctometer and Quantumeter work the Electric Wilds, Energoons and Gargantoon adds to the quick pace of the game. The jackpot available on Reactoonz 2 is hefty as well, though you’d have to land scores of the lowest-paying game symbols in order for them to make a contribution. Reactoonz 2 plays perfectly on mobile, which is where most of us play our slots and casino games these days.